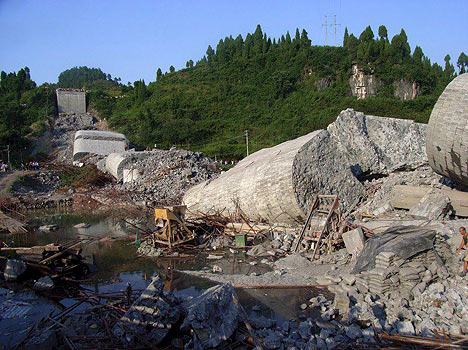 The Monday collapse in the southern town of Fenghuang rekindled concerns about rushed, shoddy building amid China’s torrid economic expansion.
Fenghuang is famed for its riverside stilt houses and local families commonly wash laundry and dishes in the Tuo.

Witnesses described hearing a rumble and seeing stones fall from the structure Monday afternoon after construction workers removed the supportive frame from the 42-meter-high, 268-meter-long vehicle and pedestrian bridge across the Tuo River.
”The whole thing collapsed,” said Nong Xiaozhong, one of two survivors in a 12-man construction team working under the bridge.
”There was no time to warn the other workers and I just managed to run a few steps before I was covered under the stones,” ”I crawled to the road nearby and an ambulance came in 10 minutes. I was rescued.”

Rescuers managed to save 86 people, including 22 who were injured, many from the 123 workers on the site at the time of the collapse, Xinhua said.

The collapse was likely to fuel already deep public concerns about the quality of construction in a country undergoing breakneck economic development and where corruption among contractors and officials is common.
Premier Wen Jiabao called for a thorough investigation into the collapse, saying those responsible would be ”severely dealt with.”

Nong, the construction worker, said he and his fellow workers worried the bridge’s stone arches were too large and that the mortar was not dry enough to remove the scaffolding.

The state-run China Daily, in a report Tuesday, said that the Ministry of Communications last year deemed 6,300 bridges as dangerous because of serious damage to their “structural components.” It quoted a prominent engineer as warning that many new bridges were poorly designed and built and that China needed to heed the Aug. 1 collapse of a bridge in Minnesota that killed at least nine people.