These guys might do a good job with the sewers, but they sure aren’t repairing the pavement of Umatilla very well. Looks like I picked the wrong route this morning.

A few weeks ago, part of the Springwater by OMSI was closed for a few days while they removed this dirt conveyor used in The Big Pipe Project to get dirt out to the barges.

IÂ  took this photo in December of 2006 as they were preparing the conveyor for use.

The conveyor has since been removed, and shortly after the next notice of closure was given for prep work for creating a temporary path to carry bikes over the construction area for the new bridge.

The detour is nice and not a problem at all.

So, let the bridge work begin.

For more information on the Tri-met bridge.

Our tile guy has been great. He has been here about every other day for weeks, it kind of feels like he is family. The counter tops got installed on Friday and Mark was here all day Saturday installing and grouting the glass tile backsplashes. He used epoxy grout which is much more difficult to install but is durable and mildew resistant. While we will miss his smiling face when we come home from work, we are glad he is done. 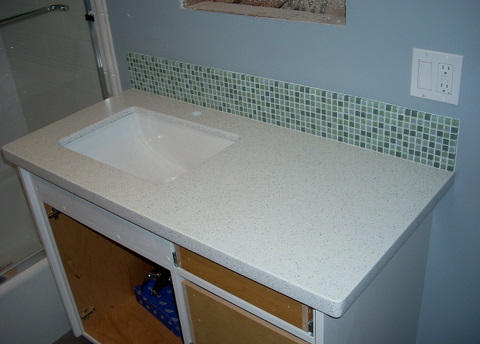 Portland Parks & Rec staff work with each neighborhood to discover the music they would like featured in their local park, then area businesses lend sponsor support to make the concerts possible.

These concerts are a perfect place to stop and relax in the middle of the bike ride home from work.

2011 Summer Concerts in the Parks Schedule