Last summer we took a trip out to see the home known as the Cantebury Castle, as it was in the first stages of demolition due to the exorbitant costs in keeping the home habitable and safe.

This weekend we drove by again to check out what was done.

It is just gone, all that’s left is a steep and expensive build-able lot for sale. 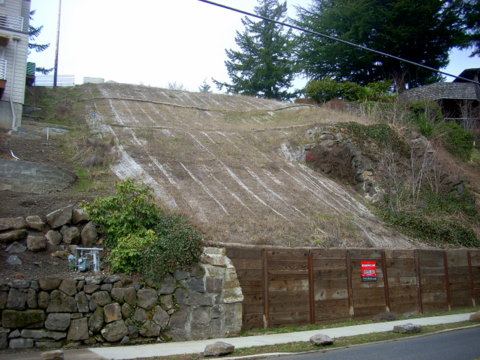 We need to get out on the bikes to shake off the effects of winter.
Heres some links to some short videos of summer rides.

The Hollywood Panera BreadÂ  in Northeast Portland will open Sunday as the company’s third “pay-as-you-can” nonprofit cafe in the nation, a spokeswoman said Tuesday.

Today is the last day the 4143 Halsey StreetÂ  restaurant will be run by the for-profit arm of the company. The cafe will close at the end of business this evening and remain closed through Saturday as the staff is retrained and the interior re-figured for the new system, said Panera spokeswoman Kate Antonacci.

When the cafe reopens Jan. 16, it will be run by the non-profit Panera Bread Foundation and will be renamed a “Panera Cares Community Cafe.” The new restaurant will not feature menu prices or cash registers but “suggested” donation prices and donation bins instead.

“One of the goals of the program is to make sure that everyone who needs a meal gets one,” the restaurant said in a release last fall when it announced that one of Portland’s six Panera’s would be the next nonprofit cafe. “People are encouraged to take what they need and donate their fair share.”
The restaurant chain’s foundation made a splash last year when it opened the first “pay-as-you-can” cafe in Clayton, Mo., outside St. Louis. A second opened in Dearborn, Mich. Outside economically battered Detroit in November.

According to the foundation, 60 to 70 percent of the customers at the first two cafes pay in full. Another 15 percent pay more, and 15 percent less or nothing.
“Panera has given it as a gift to the community and we hope they’ll sustain it,” Antonacci said Tuesday.

Why Portland?
“We were looking at the West Coast and Portland in itself is very eclectic,” she said. “We were drawn to it because people are very socially conscious there.”

And this from the San Francisco Chronicle

Panera Bread Co. will open a nonprofit restaurant Monday in Portland where customers can pay what they wish for food.
It’s the third “Panera Cares” community cafe for the company and its first West Coast location.

Panera opened community cafes last year in Clayton, Mo., and Dearborn, Mich. The restaurants are owned and operated by a nonprofit arm of the national restaurant chain, which receives no profit from the business.
“In some ways it is a test for humanity,” said Ron Shaich, founder of Panera who launched the concept for the company. “Will people step up and help each other or will they take advantage?”

So far, people have stepped up. Panera said about 20 percent of the visitors to the cafes leave more than the suggested amount, 20 percent leave less and 60 percent pay what is suggested.
Those who are not able to pay anything do not have to, but the cafe suggests they volunteer their time in support of the organization.

“This is not about a handout,” Shaich said. “This is about a hand up, and every one of us has a need for that at some point in our lives.”
There are a number of other independent community kitchen formats already in existence around the country such as those in Denver and Salt Lake City. Panera, however, is one the first chain restaurants to make the leap.

The company is converting an existing Panera restaurant in the Hollywood neighborhood into the community cafe format. Panera looked at a number of potential sites around the country but said that it felt the “sensibility” of Portland suited the project. The company also tries to place restaurants in economically diverse neighborhoods that can support the format.
If there is excess revenue, Shaich said it will be reinvested in the community such as using the cafe as a work-training site for at-risk youth.

“I think the people of Portland will do the right thing,” Shaich said.
Shaich said he would like to open more community cafes but must see first if the existing sites prove self-sustainable.

Here’s a plate of fresh chestnuts. I am not sure I ever knes what they looked like before now.

Most of the instructions say to score them with a knife.Â  A serrated knife worked best for me. Some say make one cut, some say make an x, some say just stab with a fork.
I chose x’es. It just felt right. The internest did say,Â  Do NOT roast them without scoring them first, or they will explode. Honey quickly nixed my plan to see how they might explode. 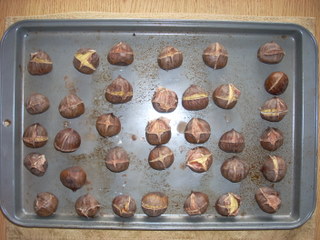 We roasted them in our oven for 20 minutes. I know the song, but the fire just seemed like overkill. 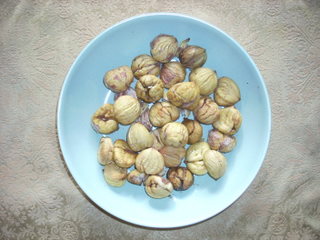 Then after letting them cool a little bit, just peel off the skin.
They were great in the stuffing, and not bad to eat by themselves while they are warm.

Each click of his photo reveals another interesting fact about Jens.

Example:Â Â  Lance Armstrong was born the day after Jens Voigt. However, Jens immediately attacked and by the Texan’s 13th birthday Jens had already turned 16.