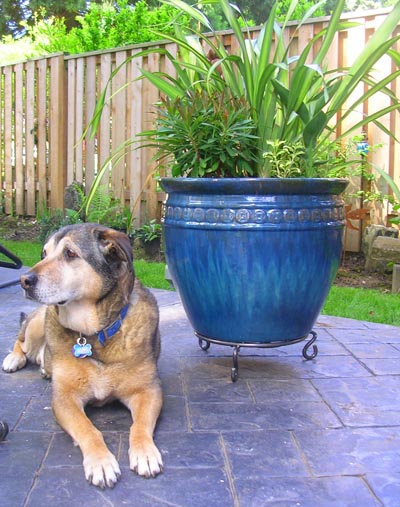 Jack is not real old. The best estimates put his age at about 12. His breed could best be described as unique. But for a large dog of his type, this is the time where he starts to show his age. Several months ago, he began to struggle with his breathing. The vet diagnosed him with laryngeal paralysis. Simply put, his breathing tube is shutting down. Our choices at that point were keep him calm, and watch to see if it worsens which could bring on serious breathing issues. Or, surgery, which has its own set of problems. Several vets told us the same thing, its trading one problem for another. We waited. Until last night, when our Jack suffered a very serious attack. Unable to breath, we rushed him to Dove Lewis Animal Hospital. These people have done a wonderful job of taking care of Jack, and keeping us informed. At least so far…..
We left him at 9:00 pm last night, we discussed his care then, again at 2:00 am, at 4:30 am, at 7:00 am , at 1:00 pm. At this point he has been transported by their ambulance to their critical care hospital. Every couple hours they sedate him and insert tubes to help him breath through an attack. Once he calms and everything is removed, the attacks come again and the sedation process begins anew. At this point he can not leave the hospital. It looks like surgery is the only alternative. It should happen very soon.Â  Having just returned from the people doctors, where we are treating the bite wounds Honey received while working to keep his breathing passage open, we now awaiting further updates on our Jack.

Whatâ€™s the latest update on the Sellwood Bridge Project?
The Sellwood Bridge Project team has been very busy these past few months preparing the draft Environmental Impact Statement (draft EIS). The five alternatives under consideration have been analyzed to determine their impacts in a broad range of environmental categories. The alternatives also have been compared against maintaining the bridge as it is with repairs to keep it in use for 20 more years (the â€œNo Buildâ€ alternative). The draft EIS is currently being reviewed by the participating agencies.

What happens next?
After agency review, the draft EIS will go to the Federal Highway Administration (FHWA) for their review. The document will then be made available to the public this fall and there will be plenty of opportunity for public discussion about the alternatives and their impacts. Another round of public outreach will occur at that time, including another newsletter, open house, online survey, and a public hearing on the draft EIS. A public comment period will accompany the release of the document. All public comments about the document received at that time will become part of the official record and will be responded to in the final EIS.

How to get a copy of the Draft EIS
The best way to look at the draft EIS will be to go through the project website (www.sellwoodbridge.org). Newsletters and other public notices will go out in advance of the public comment period.