Honey is out of town, and ‘Mark the tile guy’ wants an answer.

Just how are we going to address the top of the ledge leading to the shower in order to most closely match the differing grout lines of the bath and shower floors.

Option 1 is a large tile on top to continue the lines of the bath floor and baseboard, then adding a small piece to the end to continue the grout line. It makes the ledge look sort of like a solid step.

Option 2 is to make smaller pieces (that are slightly longer) to match the grout lines of the shower floor. It resolves the issue of having one smaller piece added on.

I am accepting your votes, but vote early, I have to have an answer by morning. 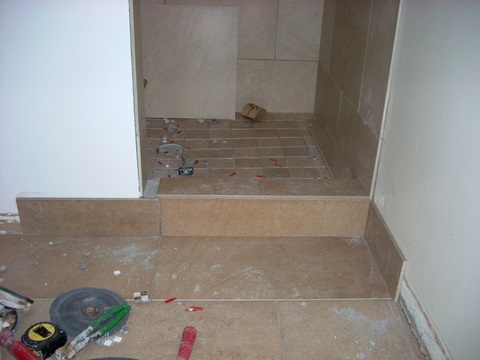 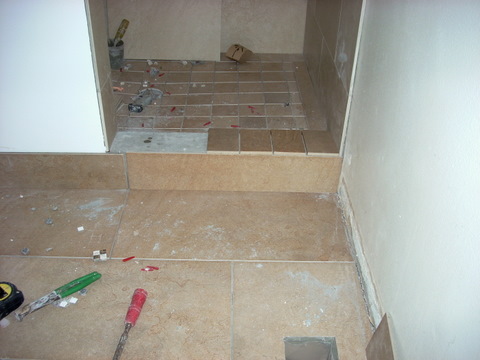 Â â€œI donâ€™t think there are any other restaurants where you can say, â€˜Iâ€™ll pay part of it,â€™ â€ Kelly says.
David Milholland, president of the Oregon Cultural Heritage Commission, has taken a loaf of bread to go and paid a dollar less than retail.
â€œIâ€™m quite aware that I didnâ€™t pay full price,â€ Milholland says. â€œI donâ€™t think I ripped the system off by doing it one time.â€
Milholland says someday when heâ€™s feeling flush, he will likely put that extra dollar back in.

Neighborhood resident Milholland calls the Panera concept â€œa noble experiment,â€ especially for a large corporation. He hopes it succeeds. But heâ€™s not sure.
â€œItâ€™s a pretty loony thing to do,â€ he says.

Thomas Doyle is bussing tables and sweeping up. Doyle, 19, is a Vancouver resident who works at a standard Panera there, for pay, and comes to the Hollywood nonprofit Panera on his days off.
He volunteers for an hour, and eats.
â€œFor some reason something just draws me down here to help out,â€ Doyle says.
Ready for the student rush

The cafÃ© has been busy all afternoon, but past 3 p.m. it gets crowded as students from nearby Grant High School arrive. As many as 25 or 30 descend on the cafÃ© for drinks and snacks. Few pay full price, many opting to donate a dollar or two for tabs that can run as much as $8 or $9 retail.
Staff at the restaurant prepare themselves, from the cashiers who take credit cards to the greeter near the entryway who explains the cafÃ©â€™s concept to newcomers. The question of whether the Panera Cares experiment is going to succeed has met its biggest challenge.
According to Kate Anonacci, Panera Breadâ€™s national spokeswoman, the chainâ€™s nonprofit cafe in St. Louis, which opened in May 2010, takes in about 80 percent to 85 percent of retail, serving close to 4,000 customers a week. At that rate, the cafÃ©â€™s revenue exceeds its costs. The surplus income funds a job training program for local youth.
The second nonprofit Panera opened in Detroit last November with similar sustainable results.

Portland being Portland, the Hollywood Panera is bringing in more customers who are paying more than retail than the cafÃ©s in St. Louis and Detroit, according to General Manager Michelle Singler.

But the Hollywood Panera, which opened Jan. 16, is serving more people who cannot or do not pay than the St. Louis and Detroit cafes. The bulk of those people, says Singler, are not homeless, but high school kids.
Overall, receipts at the Hollywood Panera are about 65 percent of retail, much lower than in Detroit or St. Louis.

Singler has talked to administrators at Grant about the situation. Customers who have overheard kids bragging about the sandwich they bought for 10 cents wrote to the high school. E-mails have gone out to Grant families.

Singler and her staff are searching for a solution, looking for the right words the greeter can offer the kids to help them understand what the cafÃ© is about, and how what they do affects other customers, especially those in need of meals. But, the general manager says, part of the idea behind the nonprofit Panera is to treat everyone equally. And that includes kids.

â€œYou donâ€™t want to assume someone is homeless or assume someone can afford to pay extra. We really canâ€™t judge,â€ she says.
Also, Singler says it would be a mistake to judge the Hollywood Panera by its 65 percent of retail revenue.
â€œI donâ€™t think itâ€™s a failure that weâ€™re in the 60s,â€ she says. â€œItâ€™s not a failure, itâ€™s a success.â€

Itâ€™s also a challenge. From Paneraâ€™s Boston corporate offices Antonacci says, â€œWeâ€™re saying, â€˜OK, Portland, Hollywood community, you want us to stay here and view us as an asset to your community. You have to step up and do the right thing. And the right thing for each person is different.â€™ â€

A memorial service and reception will be held at 4 p.m. Thursday, April 21, at St. Helen Catholic Church in Junction City for William Thomas â€œBillâ€ Hunt of Junction City, who died April 11 of age-related causes. He was 87.

He attended elementary school in Dos Palos, Calif. He served in the U.S. military during World War II with Pattonâ€™s Third Army and received five bronze stars. He worked as a plasterer and brick mason.

Survivors include his wife; six daughters, Barbara Locati of Lebanon, Lydia Marlene and Diane Sheives, both of Stigler, Okla., Joy Bayer of Silverton, Terri Bayer of Arlington, Wash., and Toni Colvin of Aurora; a son, Tomie of Junction City; two brothers, Troy and Jimmy, both of Eugene; four sisters, Allene Batey-Regaldo of Chico, Calif., Eva Mayberry and Joanne Love, both of Eugene; and O.V. Evarts of Salem; 20 grandchildren; and numerous great-grandchildren.

Inurnment will be at Willamette National Cemetery in Portland. Arrangements by Virgil T. Golden Funeral Service in Salem.

It is now time to start riding the bike to work. This last week we had some of the nicer days so far of this soggy spring.

On the west side, south of the Steel Bridge, there is a row of cherry trees in full bloom.
Photographers have been shooting pictures there all week.

I cross the river on the lower deck of the Steel bridge, with views of the convention center spires.

Grassy public areas leading up to office buildings in Old Town.
This newly remodeled building used to be the Port of Portland offices.

Today the county posted the plumbing permit on the wall. We are legal in the eyes of the law, yet, we are now in the system.

Mark, the tile guy, has finished installing the cement backer board on the floors and surrounds in preparation for laying tile. As well as doing what looks like a great job on the show pan foundation.

Plus he has placed some tiles down for Honey to see just how the upstairs floor might look like against the tub.

Old style can be solid, but not always most efficient. Sometimes newer is better. Replacing some drainage systems will hopefully make some things, well, drain better.Â  So today the sewage system was replaced from upstairs……….

down through the the main floor bathroom. 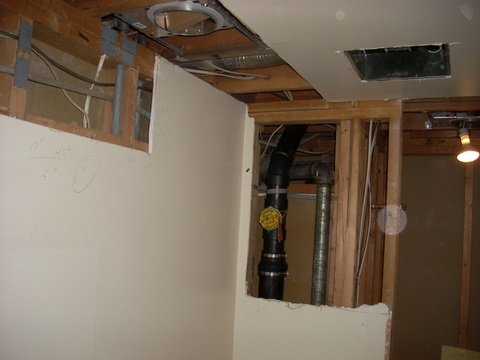 Currently, the drywall work is waiting for the tile guy to install his tile cement board.
The tile guy is now waiting for the county to approve the permit, for the work to the tub, shower pan, new pipes,Â  and sewage replacement.
The county guy isn’t going to come out on Friday since he is waiting for more tax money in order for the county offices to be open 5 days a week.
Because now, they dont work on Friday.
I guess that means that nobody is going to work here on Friday, or Saturday, or Sunday.

This was a good time for Honey to head east to Louisville.
Have a good time Honey and enjoy that clean and convenient bathroom.

We got a couple tubes of mason bee cocoons that we are hoping will hatch about 30 bees.
Plus we want them to know that they always have a home to come home to.
So they should soon be hatching, and going about their busy bee like activity.
Then plugging up the little holes with baby bees for next year. We will watch closely.
Last year we had a colony of bees in the bird house below this bee home, but it doesn’t appear they are coming back.

We got our bees and home from The Backyard Bird Shop, here is their blog post on Mason Bees.

The Backyard Bird Shop has recently been instrumental in promoting a bird seed tax to assist with wildlife preservation projects. Wildlife habitats are shrinking rapidly in the Portland metro area especially, and much work is needed to preserve and resurrect the areas that we do have left.

There is a new tub that is almost plumbed and in place.

Pipes had to be diverted to avoid the space for the built in medicine cabinet. 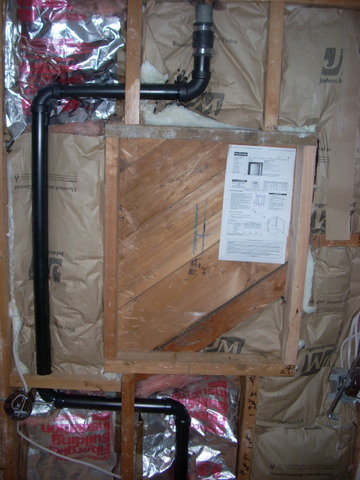 There are pipes behind the walls that are rusted through and leaking water. 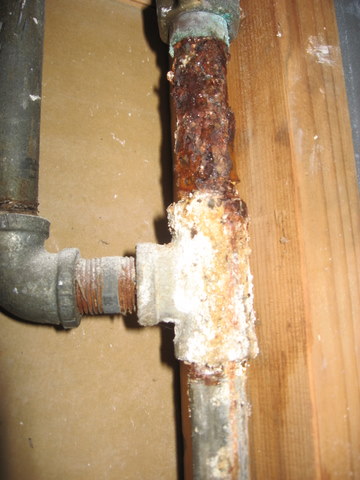 There are shutoff valves that no longer actually shut off. 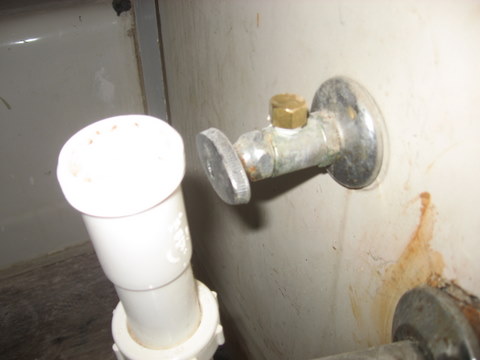 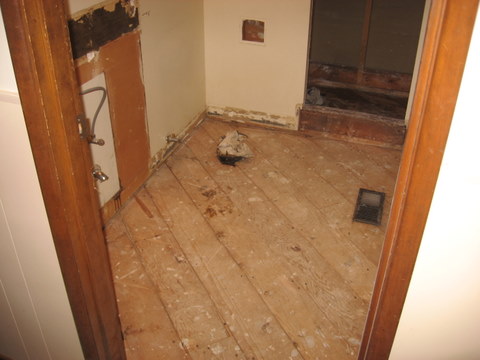 There are rooms that will soon have nothing left from the original 1960 construction. 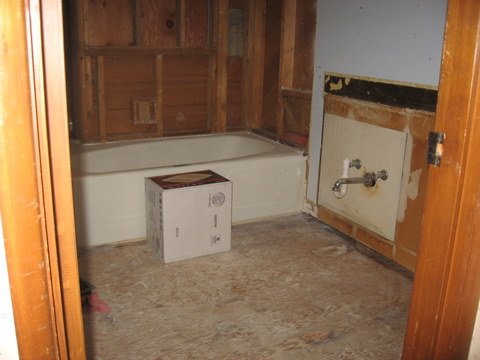 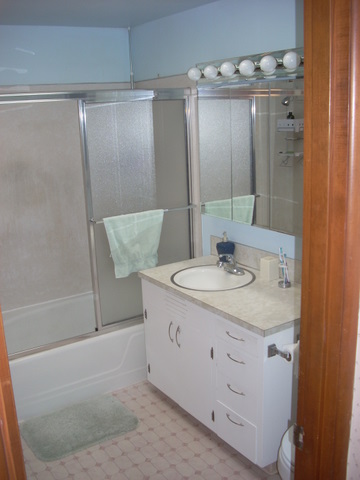 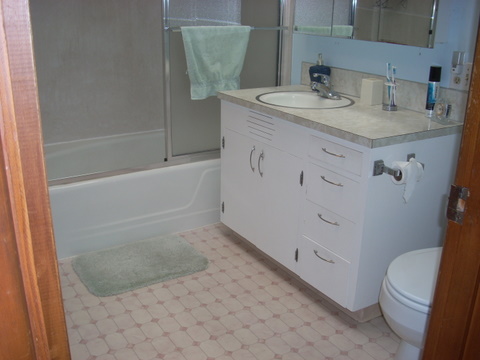 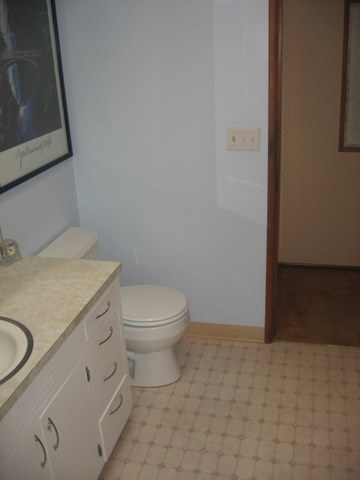 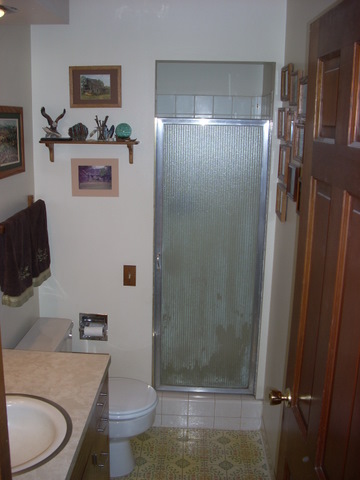 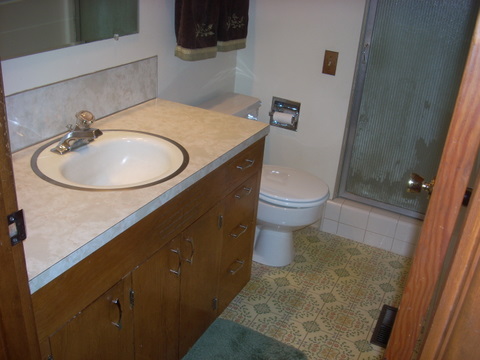 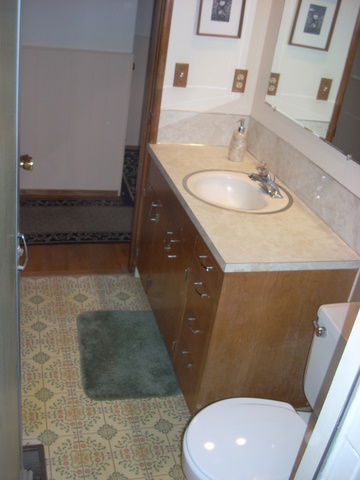