My Alma mater the University of Oregon, College Footballs #1 team in the nation has a big game with the USC Trojans on Saturday.Â  This map show the extensive nation wide coverage for the game.Â  All the people in the yellow get to see that game.Â  This weekend we are travelling. That circleÂ  is where we will be.Â  Hmmm, that is not a yellow area…….. 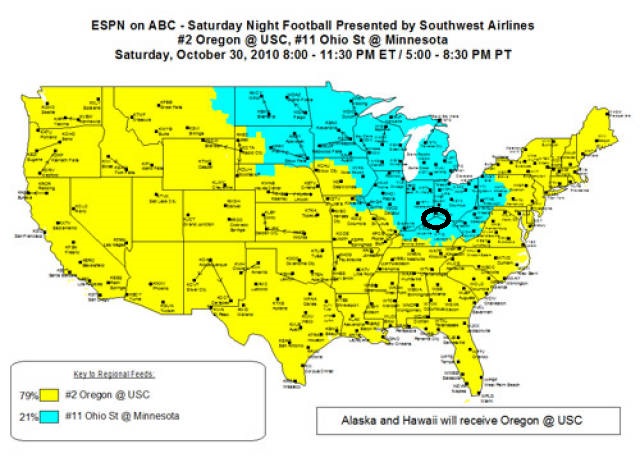 This article was taken from the Seattle PI Blogs.

In sentencing the Selah man who made a series of threats to Sen. Patty Murray, U.S. District Court Judge John C. Coughenour read a lengthy statement written by one of his law clerks, Colin George.

Before reading the statement, the federal judge noted that he’d asked his clerks to write down what they would tell Charles Alan Wilson when he was sentenced for leaving a string of explicit threats with Murray’s office. Wilson later told the court he was afraid the health reforms pushed by President Obama and supported by MurrayÂ  reforms derided on the right as being an overreach by the federal governmentÂ  would cut into the disability benefits he was receiving.

Introducing George’s statement, Coughenour, a Reagan appointee who presided over the Ahmed Ressam terrorism trial, offered that he couldn’t express his concern better than his clerk.

The full text of the statement follows:

Mr. Wilson, I have no doubt in my mind that you are passionate about your country. That you respect the constitution. And that when you made those phone calls about what you perceived to be the dangers of health care reform, you thought you were standing up for what you believed to be American ideals. But I want to remind you about one of the most important American ideals of all.

The presidential election of 1800 was the first time in the history of this planet that power was transferred from one political faction or party to another without bloodshed. Power had transferred between political allies peacefully before, but between enemies, the only transfers had occurred with the help of swords and guns. The American system changed all that.

The very foundation of our system of laws and government, and the promise of democracy is that political change is accomplished through reasoned debate, through persuasion, and through voting.

And we have a word for people who try to effect political change through violence and threats of violence. Just this week, a commentator on one of the major news networks said, and I quote, “Not all Muslims are terrorists, but all terrorists are Muslims.” This is about as ignorant, hateful, and bigoted a statement as I can imagine. Terrorism is not a religion.

At the same time, Mr. Wilson, ending terrorism is not a crusade. It’s not a clash of civilizations. It should not be an unending war, and it should not be an excuse to limit anyone’s freedom, American or not. Ending terrorism requires a commitment to the elimination of violence, coercion, and threats from political life. And when I hear people in the media who proclaim on one hand to be supporters of the “war on terror,” while on the other hand stirring up the kind of violent outrage against our elected leaders that you felt, well it makes me think that we have lost our way. And it makes me think we have the wrong defendant here today.

You lost your way, Mr. Wilson. And you let the urge for violence overcome your commitment to reason. And when you did so, you did not just break the law, you betrayed the values about which you are so passionate. Mr. Wilson, I believe that you are sincerely sorry for what your actions. And I doubt I will ever see you in my Court again. But as serious as our commitment to peaceful political change is, so must be the punishment for those who seek to effect change through threats and violence.

A friend of mine recently left our business office, to follow her dreams in becoming a surgical nurse. As part of her training she has beagan a 3 month internship working in the Operating Rooms of the Emergency treatment center of a local hospital. 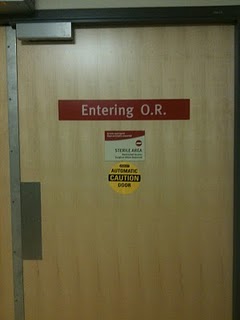 Day 2 was great. It was a slow night in the O.R., so I only got to
scrub 2 surgeries. Both great experiences and I learned a lot. I got to
wear lead for the first time. It wasn’t as heavy or hot as I thought
that it would be. Still about 35 extra lbs. Good thing I lost some of
that prior to this gig. I am hoping to scrub a total knee replacement
today … we will see.

It is a privilege
and totally cool to be able to walk behind these doors. In the inside
ring of the O.R., you can see into all the rooms. I can go into any O.R.
during any surgery to observe if I am not scrubbing that case. I am
grateful and don’t take it for granted. I pray for all of my patients at
the beginning of each procedure. I hope I will never forget that these
are people who are loved by others and are God’s children. This was
especially true for a very young patient I had. I kept thinking of how
trusting this little one’s parents are of me, who they don’t even know.

In EastSound there is a little grocer that is easily accessible by bike using a gravelled path through the woods, where we can pick up the paper each day. Then, its across the street to have coffee on the sidewalk tables of this coffee/pastry shop. After we caught up on the news we usually continue with a little longer bike ride, and return home for lunch before getting on with the day. 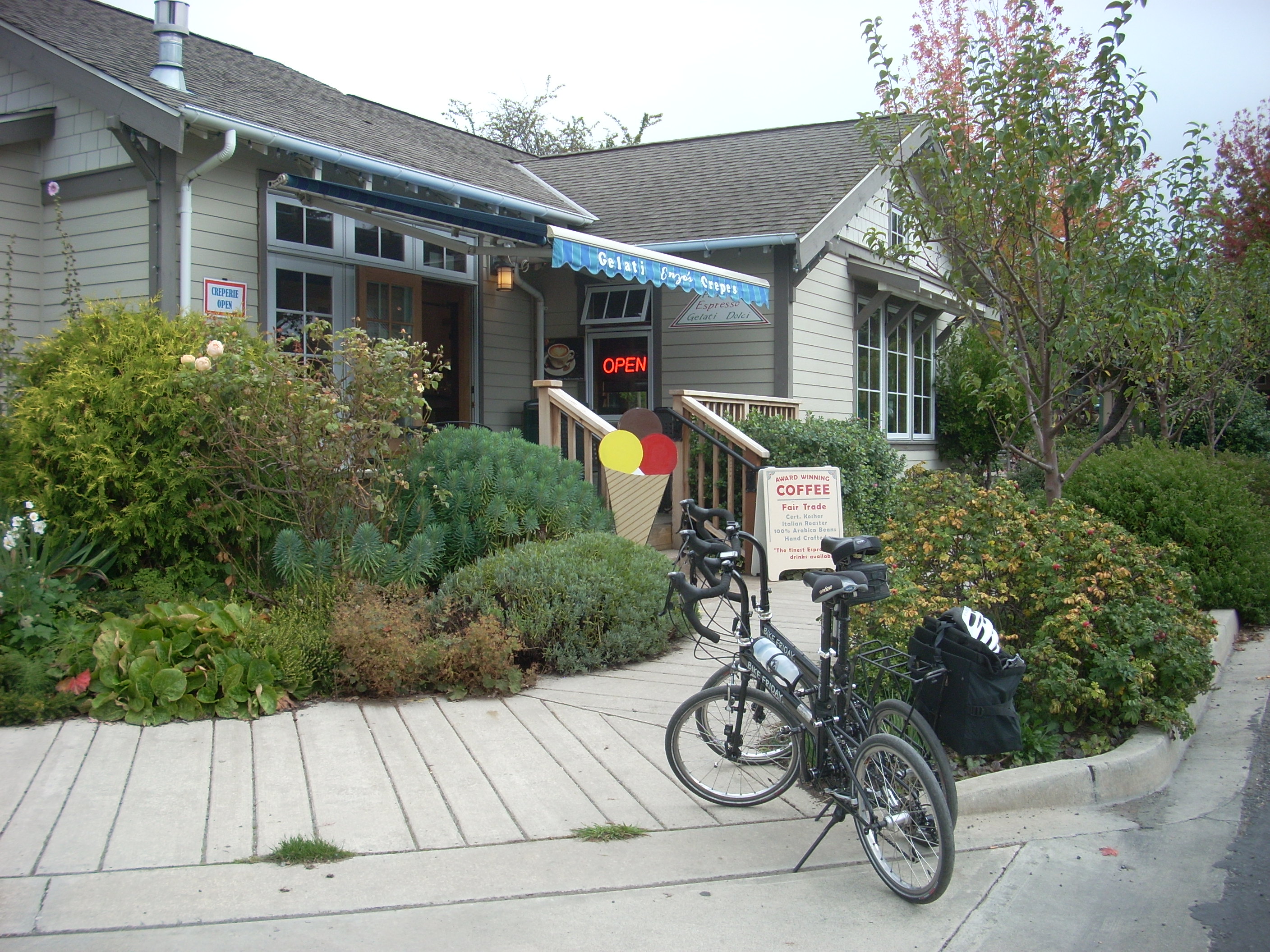 Today’s activity is Sea Kayaking. So it was off to the southwest of the island, to the Deer Harbor marina, with one slight detour in an unsuccessful attempt to return to the home where my sister lived some 30 years ago. I was there for a week, but either cant remember specifically where, or that little place just isn’t there. 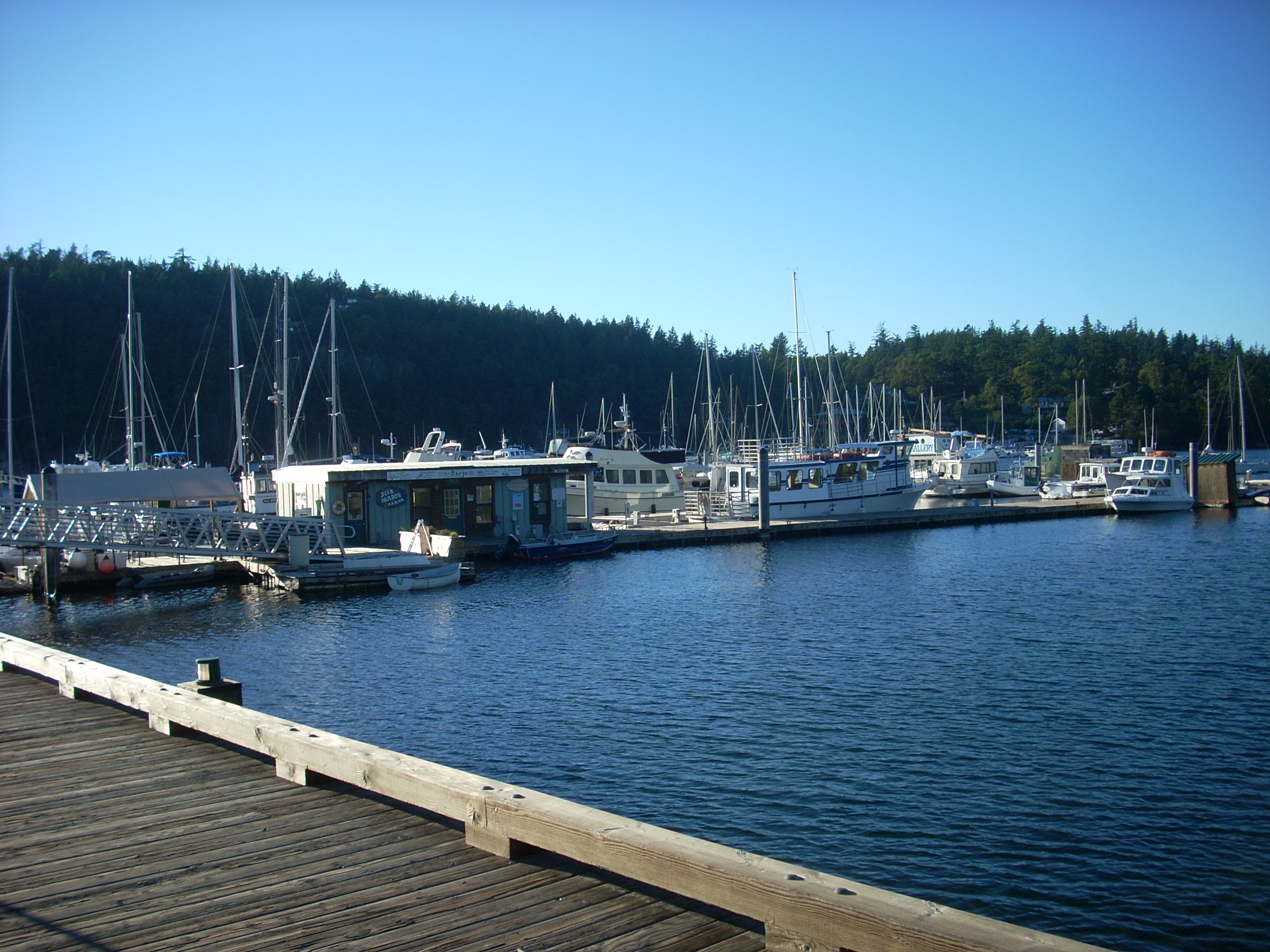 We signed with an outfit called Shearwater tours, and our friendly guide Richard spent some time to patiently explain all the how-tos of gearing up, getting in/out, going forward, and not going under 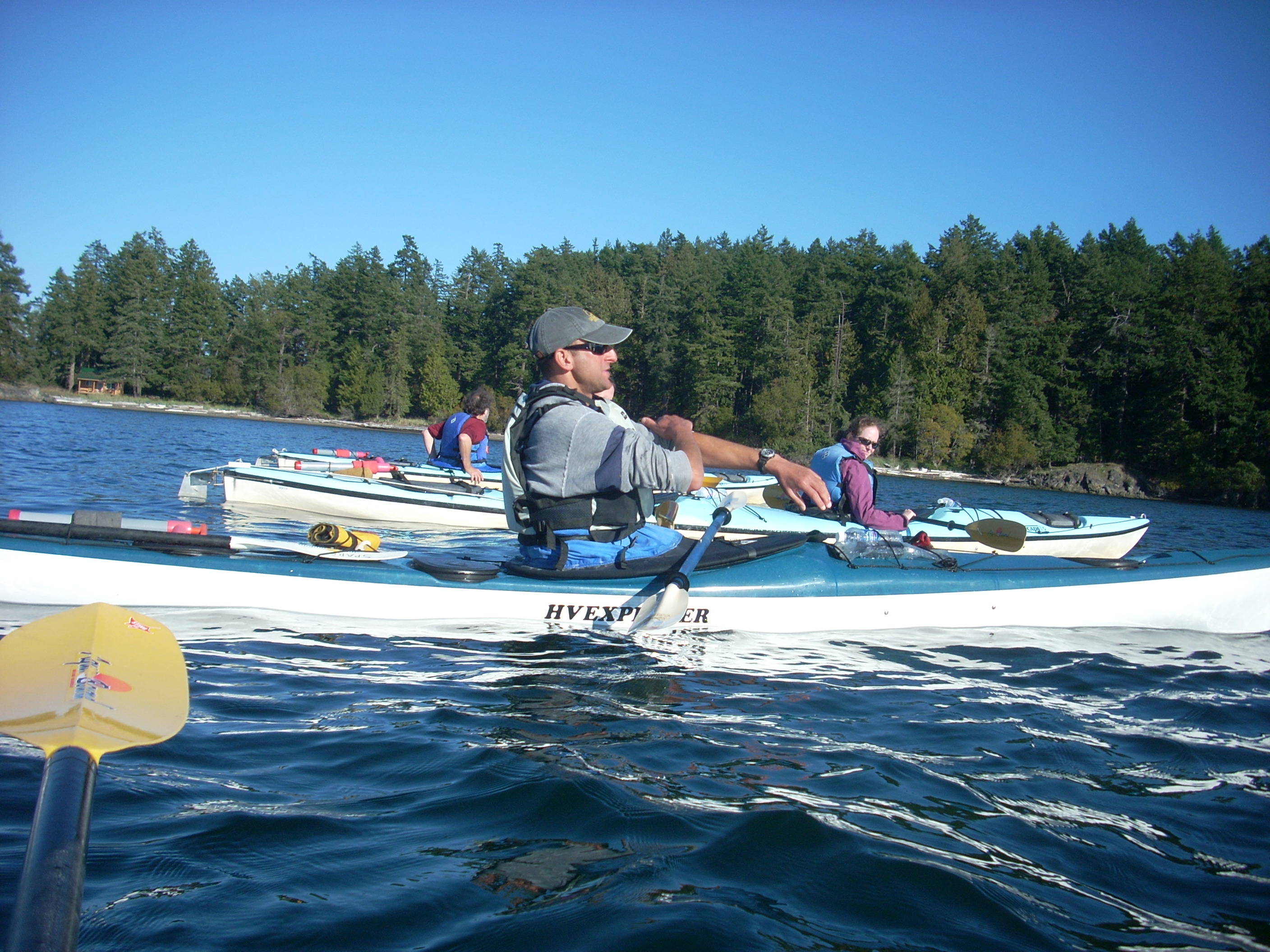 Then we pushed off and headed out of the harbor and around some of the islands in Deer Harbor. It was a three hour tour. Yes the reference was not lost on us each time we said it. 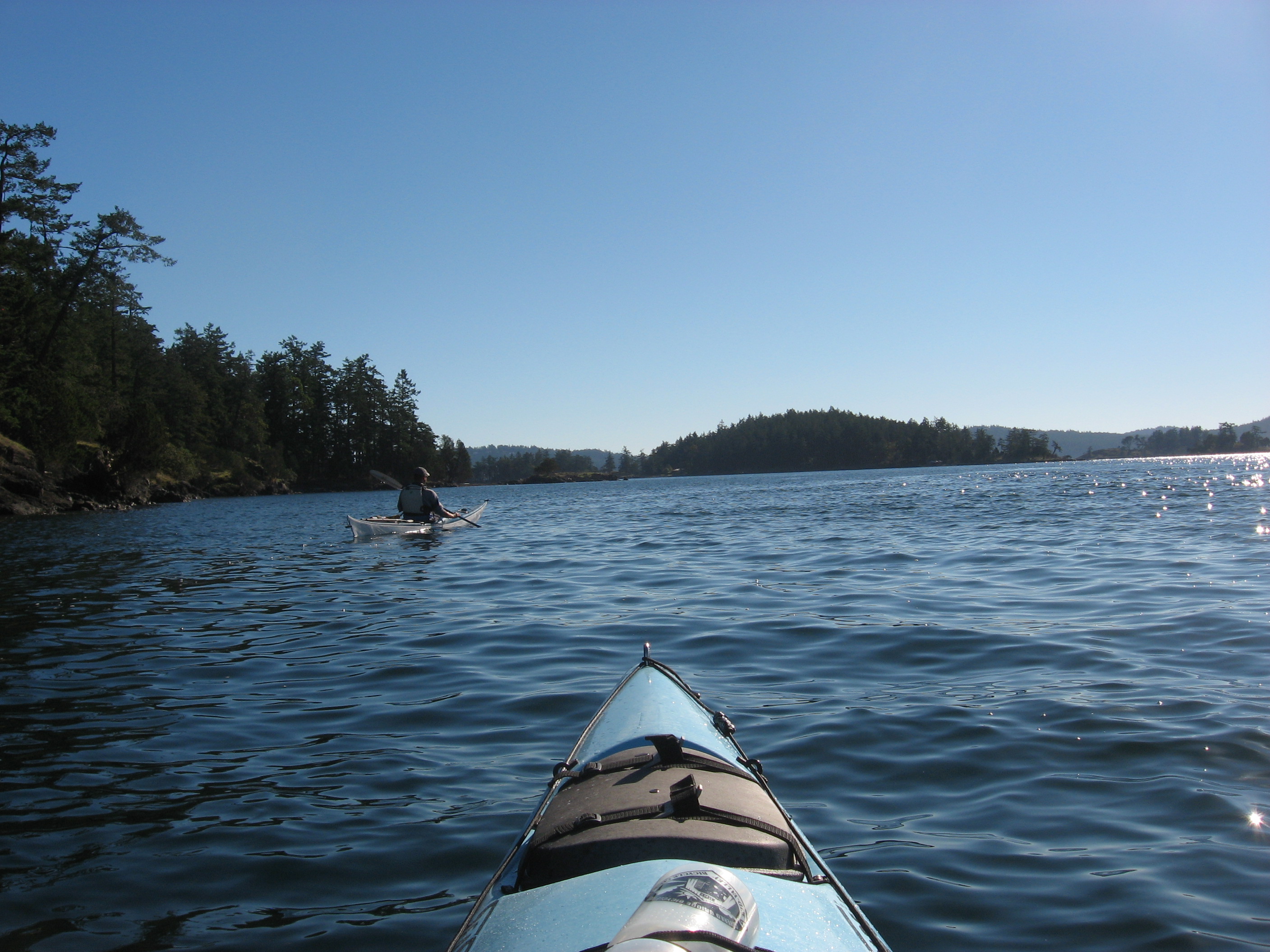 It was an amazing day. We circled several islands that were wildlife preserves, sighting a variety of birds, and a school of seals. On our return trip, honey and I silently glided our kayak within 20 feet of a large seal before he was done with us and swam off. The weather was clear and warm, and the winds that started at about 10 miles per hour later subsided so it was not a terribly difficult fight. We returned about 5:30, surprisingly dry, and with not so surprisingly tired arms.