Earlier this year, we replaced our old fence with a new 6 foot good neighbor cedar fence. At the same time, we added a solid face segment to act as a visual barrier to screen the compost bins, wood pile and storage area in the far corner of our property. While we love our compost bins, we don’t want to stare at them during dinner. In order to put up the new fence we actually took down the older, simpler compost bins and made plans to build new ones. The old system was two bins, made from 6 – 4×4 posts and welded wire fencing. We wanted our new ones to be larger, and a little more visually consistent. But since we wanted a unit to recycle/reuse, it would be inconsistent not to incorporate that same recycle/reuse philosophy into the construction. We reused materials from a number of different sources to make put this all together. 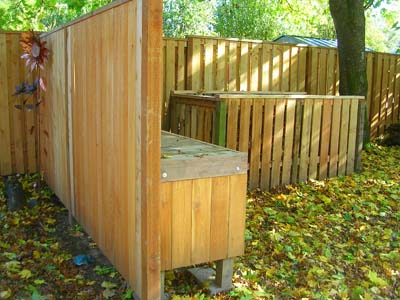 From the side you can see the screen, the potting bench and the compost bins. The visual screen will soon be fronted by some plantings and garden art like this 6 foot copper sunflower. The end of the potting bench is visible at the end of the screen, and faced with scrap cedar fencing salvaged from wood saved by my father when he replaced his fence. The siding covers the stuff stored in the lower shelf of the bench and the vertical boards serve to integrate the bench into the screen. 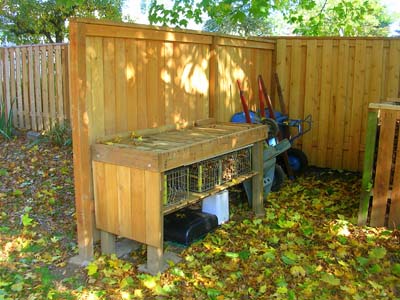 The potting bench will be used for all those outdoor projects needing a flat workspace. The table top is made from 2x6s taken from the railings of the boy’s old play structure. One inch gaps between the boards will allow dirt and sawdust to fall through. The lower shelf is also made of the same cedar boards as the siding, with one inch gaps. This year, the shelf is going to store boxes of split firewood kindling for the fireplace, using the wood from the previous “Fence Replacement Project”. The screen will also hide all our wheel barrows. 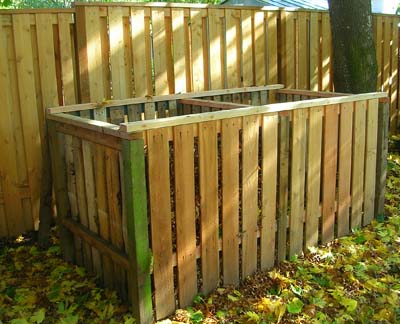 We used six 4×4 posts, with the outside 4 posts set in concrete which was a left over from a completely different fence project. Both bins are 4 feet by 4 feet, and are nearly 4 feet high. This is higher than would be recommended in most cases, but I wanted these two bins to have a large capacity, in order to deal with the large amounts of leaves. We left nearly two feet between the fence and the bins, so that we could keep the area clean thus preventing debris piling up and rotting the fence. This will also allow Jack, the boundary patrol dog to regularly inspect and mark the perimeter, thereby keeping our home safe from intruding cats and wildlife. 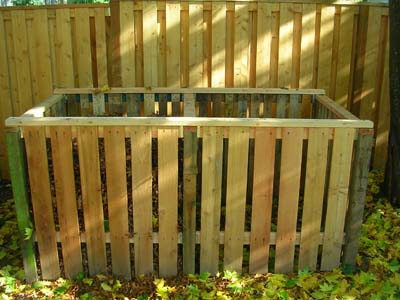 The front of the bins are faced with the same fencing used for the new fence. In this way the bins merge into the fencing, making them a little less obtrusive, and a little more a part of their environment. All boards are given a spacing of 1 to 2 inches. It is important to allow for a lot of air circulation within the compost pile, to aid in decomposition. A 2×4 top railing was added to mirror the railing of the fence and to help tie the ends of the bins together making the structure extremely rigid. 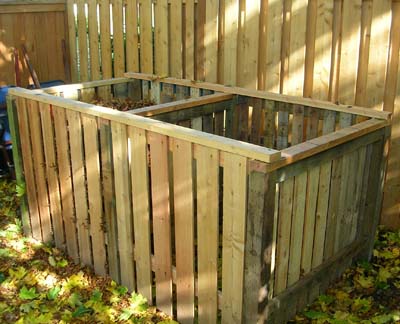 This is a good view of the pallet boards that were used in the back and three sidewalls of the bins. The entire project took a little over 40 separate pallet boards. The boards came from about 8 or so pallets. The number of usable boards per pallet vary with the age and condition of the pallets. Retrieving the boards can be a little labor intensive in that these guys use a lot of threaded nails to put the pallets together which makes it difficult to get them apart without breaking the boards. Plus the wood in these pallets is usually very hard, and hold nails tightly making the deconstruction a chore. But this is exactly what makes them so great to reuse in a project like this. All the boards are fastened to the 2×4 with wallboard screws, using an electric drill. The screws, were of course, leftovers from a sheetrock job completed by Honey. 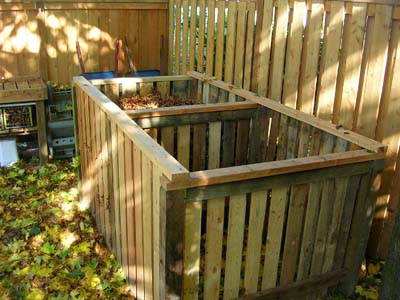 I tried to match up the sizes and wood textures so that the woods of each wall section matched. A point of aesthetics that only I will care about. We also put them on the inside of the 2×4 railings instead of the outside, which may not be the best decision for aesthetics, but we thought it would make for a more solid wall when fighting the pressures of the soggy piles.
We are getting them done just in time to start filling them with leaves. 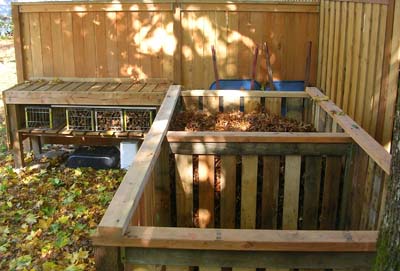 The intention is to fill the bin on the left first. We will allow this bin to sit and decompose for the first year. Leaves, grass and kitchen scraps will be added throughout the year, and while it will be nearly overflowing with leaves soon, it will settle to half its height by spring. At that time, some of the pile will be moved to the bin on the right. After moving some to the new bein, grass clippings from the yard will be added, which will provide another shot of nitrogen to aid in decomposition. After that another layer of the older compost will be added. This process is repeated until the bin on the left is completely empty, and ready for the years supply of leaves. 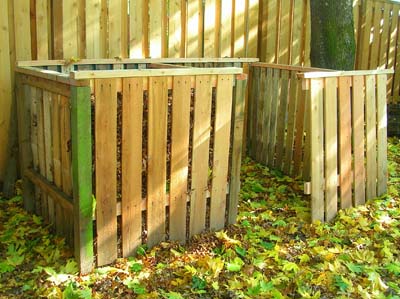 Soon after the bin on the right is full, or sometime before the left bin needs emptying again, the finished compost can be reomved and used for planting, mulching, or adding to the gardens. To easily accomplish this, we can simply lift the front sections off the bracket hangers on which they are resting. These rails were not been secured to brackets as were the rails of the other walls, so that they can removed, allowing full access to shovel out the entire bin. Holes were drilled in to the ends of the top rails in the front. Large nails were dropped in, serving to tie the sides together in the front of the bins, while still allowing the front sections to be lifted off when needed. We completed the project with ringing the base of the front and sides with bricks, which gives the bins a little more of a finished look, and prevents Jack the boundary patrol dog from digging under the boards, at which time he transforms into Jack the “eats anything off the ground” dog. 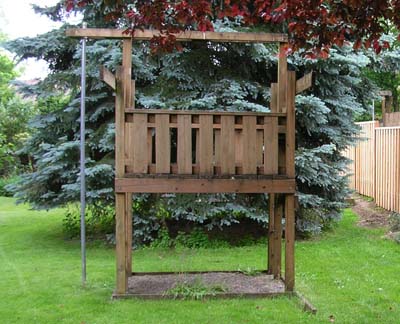 This is the old play structure that used to exist in the back yard. The swing, ropes, ladders and cover have all succumbed to the weather and the years. The wood was pressure treated, and remained strong in its previous existence, for nearly 20 years. Much of this wood has been reused in the bin and bench project, in which it should last many more years.