Honey and I have done this ride on three separate occasions.Â  Each time the rains and the winds we rode through made for great stories afterwards.Â  One such year it rained so hard that it washed away many of the directional arrows, which can make staying on course a bit of a challenge.Â  Another year saw head winds out in the straight and flat roads on the valley floor so relentless that I think I may have used my lowest gears I had. And this was on a flat part road.Â  So when we saw that this year the Strawberry Century was happening on a great weather day, we just had to go so that we could experience what the ride would be like if we actually enjoyed it.Â  And we certainly did enjoy the sunny blue skies.Â  Looking back on it, we would have used more sun screen.Â  The route has been modified, taking out the long loop through the valley floor.Â  Most of the roads were quiet, all were quite scenic, taking us east from Lebanon, circling Foster Reservoir and heading back through Sweet Home and Scio. There were no monster climbs, yet enough rollers and small climbs so that you knew when you were done,Â  you have done some climbing.
Plus, and very generous helping of strawberry shortcake and ice cream at the end.Â Â  We do so enjoy the rides that provide us a treat at the end.Â  It seems to help get us through the last leg, when our energy is starting to wane and the muscles begin to ache.

Oh, it was another bad camera karma day.Â  There is always so many details I need to take care of and equipment to pack.Â  What you don’t want to do is overlook something or assume that some critical detail is covered.Â  For example you should never just through your camera in the bag and assume that your batteries are charged, or that you have spares with you.Â  That is when you find yourself out on the ride, only to learn that the camera you packed is now just useless dead weight.

When people know you ride your bikes a lot, they tend to come to you to relate their encounters with other cyclists. Usually, it is not a happy tale, and since they couldnt vent to the cyclist they met on the road, they have come to the nearest cyclist they can find so that they can rant about all bike riders in general. Such is the case with one particular friend at my office. For several years he would blame cyclists and claim his intentions that he should just run them off the road, and they do not belong. On and on, we bike riders have heard the same complaints. Some are valid, some are not, but mostly they come from people who have not, will not, or claim they just cannot ride a bike themselves.

Now comes higher fuel prices. And now, this same guy who with almost seems happy to read the stories of bike accidents, is riding his bike to work. There are much better reasons to motivate someone to get on a bike, but if high gas prices help increase ridership and bicycle awareness, then that seems like one good thing that has come from it.

And……. yet another political cartoonist takes a shot. This one from Chip Bok. 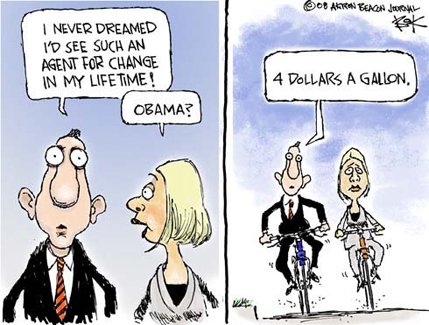 This one from Robert Ariail.