Northwest Evaluation Association (NWEA) moved December 20, 2010 from Lake Oswego to downtown Portland in to the former Port of Portland building at NW 2ndÂ & NW Everett. While this is Team NWEAâ€™s 3rdÂ year participating in the BCC, this is their first year at their new location. Bike commuting growth has been phenomenal, to say the least!

Super advocates at NWEA helped add more bike parking to keep up with the growing number of bike commuters.

What bike facilities are provided at NWEA?

We were fortunate that the building already had a secure, indoor bike storage room and we had full support from Operations and Facilities during the build-out to preserve this space. Within the bike room there are lockers and rack space for 15 bikes.

Post-move and as the weather began drying out, we were starting to run out of space for more bike commuters. Working with Facilities we were able to re-purpose an old, fenced storage area for a new overflow rack. Staff now have access to this overflow area during the week, and they can use it to keep their bike on-site for weekend riding. With the increase in bike commuters plans are in the works to expand our bike parking capacity.

The NWEA facilities include additional lockers and showers for all staff, including bike commuters.

How are cyclists supported at NWEA?

This has been the fun part. Tom Orth and Paula Funatake could spend hours just talking about bikes, cycling, bike racing and the fun of bicycling. Their enthusiasm along with the new building sparked a cooperative effort to encourage more staff to try bike commuting as well as just making connecting with each easier. Through coordinating an organizational event for the Bike to Work Week and Day back in May, they held an informational bike commute brown bag and arranged a breakfast for bike commuters on the Bike to Work day. There were a few first time bike commuters and that was really great!

A NWEA Bicyclist email list was created for people to ask questions, share stories and expertise and just have some fun around the general topic of cycling, not just commuting. Over the past months Tom and Paula have become the informal bike advocates and contacts when questions, issues or concerns come up. Many of our cyclists are also roving advocates encouraging and helping other newer or interested bike commuters.

Recently, one of our VPs has done some bike commuting and has become ourÂ Super Advocate, Anne Udall. Together we have had a great time looking into expanding bike parking and we have been able to have NWEA become a businessÂ member of the BTA. We are very excited about the possibilities and helping to increase bike commuting even more at NWEA.

Adding to the fun of the Bike Commute Challenge, we developed a major bike tour race game that includes jersey competition for overall leaders, weekly stage winners and we recognize those who have a 100% commute rate for the week. We hold weekly stage awards ceremonies and have a BCC Wall of Fame where we post all the award winners.

This morning on my bicycle ride to work on the Springwater Corridor just north of Oaks Bottom, I stopped to watch this doe, chewing on the ripening blackberries.

Don’t know how he got to this spot, as its bordered by the Willamette, and heavily trafficked Mcloughlin Blvd.
But the little guy did look hungry, and perhaps not as afraid of people as he should be if he is to survive this far in to the urban environments.

Now its 4 days later, and riding at the same stretch of the bike path and theres the doe again, though this time there are three of them. I was able to get a shot of the last, and smallist deer as they headed back into the bushes.  They must be bedding down in this spot right off the trail. 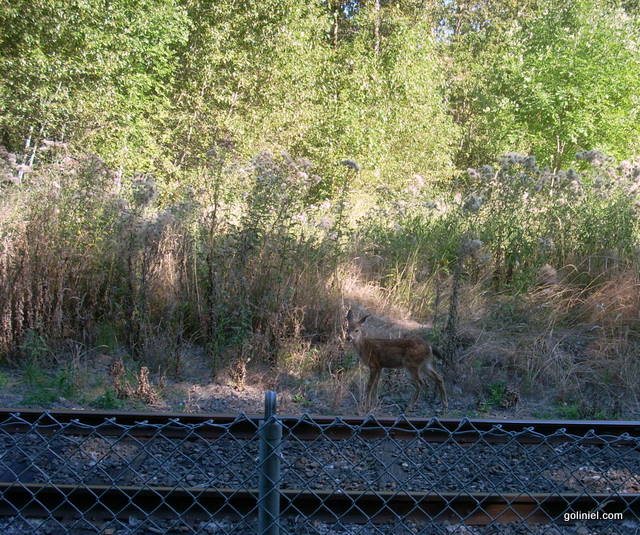 The ROAM ride (http://web.mac.com/josef.janning/Roll_over_America/Home.html) started out of Portland.
I stopped by to check out the 50 bikes and see them off on their trip across the country. 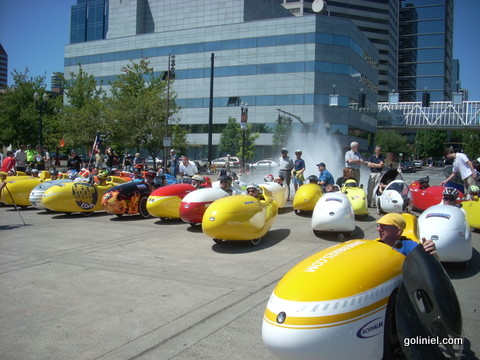 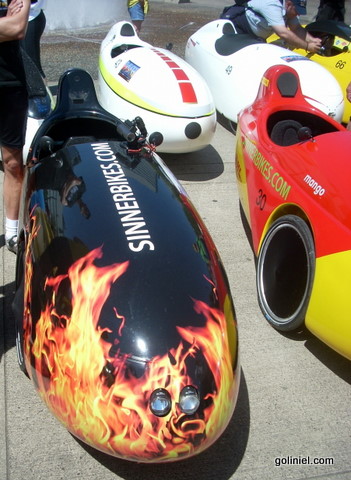 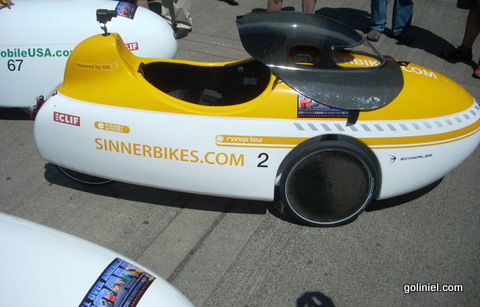 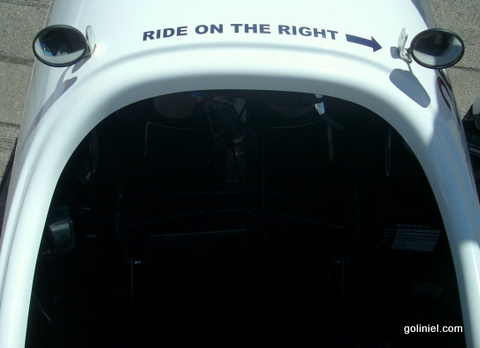 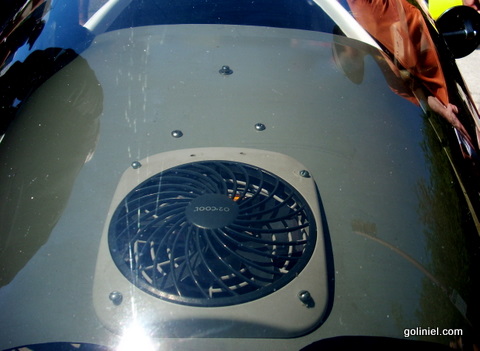 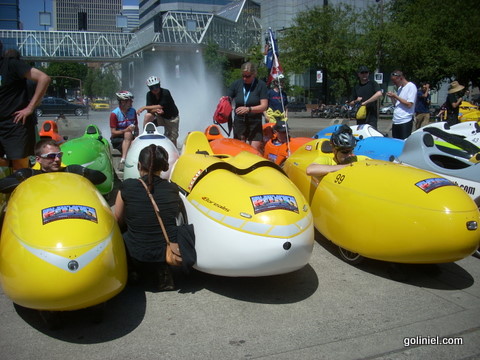 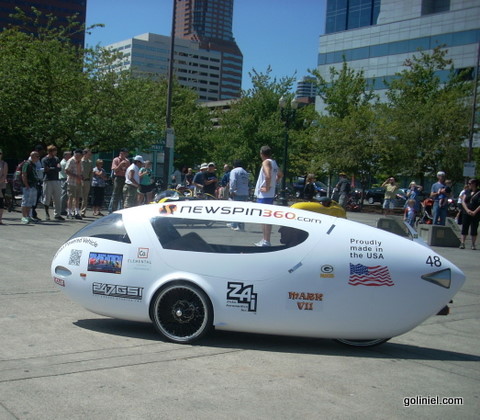 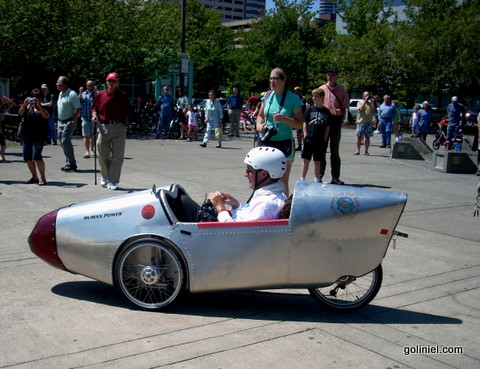 These guys might do a good job with the sewers, but they sure aren’t repairing the pavement of Umatilla very well. Looks like I picked the wrong route this morning.

A few weeks ago, part of the Springwater by OMSI was closed for a few days while they removed this dirt conveyor used in The Big Pipe Project to get dirt out to the barges.

IÂ  took this photo in December of 2006 as they were preparing the conveyor for use.

The conveyor has since been removed, and shortly after the next notice of closure was given for prep work for creating a temporary path to carry bikes over the construction area for the new bridge.

The detour is nice and not a problem at all.

So, let the bridge work begin.

For more information on the Tri-met bridge.

It is now time to start riding the bike to work. This last week we had some of the nicer days so far of this soggy spring.

On the west side, south of the Steel Bridge, there is a row of cherry trees in full bloom.
Photographers have been shooting pictures there all week.

I cross the river on the lower deck of the Steel bridge, with views of the convention center spires.

Grassy public areas leading up to office buildings in Old Town.
This newly remodeled building used to be the Port of Portland offices.

The Portland Bureau of Transportation (PBOT) has just announced dates and locations for their five Sunday Parkways events. PBOT has also announced that the routes will be longer in length this year.

Sunday Parkways will begin this May with an opening event in East Portland. See the dates and locations below:

Portland Mayor Sam Adams had this to say about the events via a press release: “This year, weâ€™re including more neighborhoods and making each Sunday Parkways longer in response to supportive feedback.”

This year the first four events will last from 11-4 pm, with the September edition going from 12-5 pm. PBOT is yet to announce exact route locations.

Check out SundayParkways.org for more info.

I am slowly downsizing my work area, commonly known as a small office cubicle.

Today I am considering some old comic strips that a friend gave to me in the late 1990’s.
These two strips have moved from wall to wall as I have transitioned though various office configurations.

We need to get out on the bikes to shake off the effects of winter.
Heres some links to some short videos of summer rides.

Each click of his photo reveals another interesting fact about Jens.

Example:Â Â  Lance Armstrong was born the day after Jens Voigt. However, Jens immediately attacked and by the Texan’s 13th birthday Jens had already turned 16.